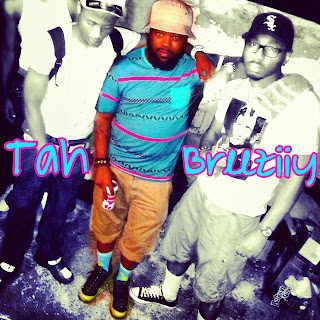 BVM: who is tah breeziiy?

Tah Breeziiy: Tah Breeziiy is more than a name, Tah Breeziiy is a brand lol. Thats the typical shit a artist would say but no seriously, im just a normal 22yr old that knows how to rap. Im from NJ, im short 5'5, I love food (fried chicken mainly) typical right? lmao, im muslim, I like tattoos, I like sneakers, I can dance and sing outside of rapping as well, and I have a degree in Criminal Justice and Child Education as a back up just in case this rapping shit doesnt pop off lol!

BVM: something nobody knows or wouldnt expect from me?

Tah Breeziiy: most people who know me will tell you im "OUTSPOKEN" ... to the point where people just say im mean. I'm actually not mean, im just honest... but no one would actually believe the fact that im shy! im good at just going for it though, the things im shy about or not to sure of, rarely stop me. It gives me something to accomplish, something to get over and get through. "no one is going to believe this" lmao

BVM: what are you listening to lately?

Tah Breeziiy: Lately im listening to all sorts of music, including Tah Breeziiy, J. Cole, Paramore, Gucci Mane, Yo Gotti, Tamar Braxton, Maroon 5, Ariana Grande, Lil Wayne, Omarion, and alot of NJ Underground Club Tracks. Also I listen to Biggie "Ready To Die" album everyday, because thats my favorite rapper. I have a respect for music in general because music translates emotions and its actually theraputic depending on what your listening to. I like all different genres of music. I'm a blogger so im listening to all the new singles artists are dropping.

BVM: whats the first song you ever remember hearing that made you want to get into the music business?

Tah Breeziiy: the first song that ever made me want to rap was "Ice Ice Baby" by Vanilla Ice lmao! that was my shit I was young as hell, im not even sure if it was out at the time it may have been old, but I was like this song is really popping. Then it was "Workin Em" by Lil Wayne, that whole Dedication 2 mixtape was a classic. After he said "Weezy F. Baby the Muthafckin Carter, bitches on my stick but my name not Harry Potter" I knew I wanted to rap, because I use to say shit like that in normal conversation and Harry Potter is one of my favorite movies lol.

Tah Breeziiy: my favorite rapper hands down is Biggie, I try to use one of his instrumentals on every mixtape! He was my inspiration mainly, but outside of Biggie my inspirations include Snoop Dogg, Dr. Dre, Jessie J., shit anybody that made it on my ipod is a musical inspiration!

BVM: how did you develop your personal sound as an artist?

Tah Breeziiy: I initially only wanted to be on club tracks as a vocalist. So at first nothing was really mapped out, I just got in the booth and said what I was told to say, that went really well. Then I realized I wanted to say more shit on the tracks then dance moves, so I started writing about shit you see at parties or in life in general and adding little skits to the songs I was doing. My friends would be like "this sounds hot, or I like that" or "im not feeling that" , it was more of a progression that developed my sound. I went from doing club vocals, to being featured here and there on people songs, to doing my own songs. I have bars and a flow, it was my delivery that needed to be worked on. Once I got that downpacked it was on!

BVM: what can people expect at your live shows?

Tah Breeziiy: well whenever I do a live show, people who know me or know of me, knows that im a dancer before anything, which is how I ended up in the club music lane in the first place. So at a "Tah Breeziiy" show, there will be dancing! I hate slow dragged out beats, so every beat and every song will be upbeat and energetic, I want the crowd to be apart of the show as well, and they can expect me to talk my shit lol!

BVM: what song do you love to perform the most and why?

Tah Breeziiy: out of all my songs I have three songs that I like the most for separate reasons.

Make You Choke - is a club rap song about getting head and promising not to make the girl choke. The beat was well produced and it has alot of funny ass lines in it including "licky licky licky lick, while your sucking on my pogo stick , my dick is like a baby arm and they said the third lick is the charm"

HAM - is the intro to my latest mixtape Charm & Metaphors Vol.1 , it is one of those songs where you just gotta pay attention to what im saying because its a story of me going HAM!

Cartel Cypher  - is a remake of a club song, the beat is stretched to be rapped on and it got alot of plays, and blogged alot. It was a song of dedication to the supporters of my team (Cartels). It features 3 other members of the Cartels and it is a fun song.

BVM: How can my fans keep up with you with upcoming events? Promoters book me for events?

Tah Breeziiy: being as though im not signed, im not mainstream and I have right now a local buzz lol, I still utilize my social networks to promote my music. So if you want to know what im doing musically or how to contact me im always online via twitter (@Tah_Skywalker), instagram (@BreeziiyCocaine) or facebook - Tah Breeziiy. I always respond and converse with people because im a people person and im really down to earth.

BVM: whats next for you?

Tah Breeziiy: right now I have a mixtape out called Charm & Metaphors Vol.1 , its pretty dope, I advise yall to check it out lol. next im going to drop a clubtape "raps over club beats" called In Between the Beats , I always make sure I remember where I started from and what got me to where im at now. im doing a collaboration EP thats untitled with one of my friends. and following that im going to release another mixtape that im still in the process of recording, naming, picking beats for! im in talks of doing a 5 song EP of me doing covers of R&B and HipHop songs. "I can sing too" lol! and I want to shoot a video sometime soon lol!