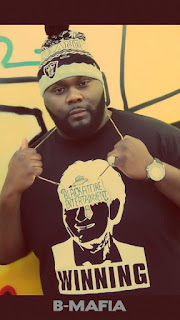 Earlier this week I had posted a tweegram about needing new music to listen to on my Instagram and lets say my email got pissed at me pretty quickly lol.. Out of all of the emails a few tracks really stood out to me.. One came from Hip Hop Rapper B-Mafia and the track was titled "SPAZZ".. Now we all know I am not a hip hop head but I really dig the beat and the lyrical content on the track..Before I let you hear it I'm gonna give you a little info about the artist..

Alot like other inner cities, Trenton presented me with obstacles and
temptations. However ambition and creativity was the means to a way
out for B-Mafia. Always the one to have a hustlers spirit and hunger,
B Mafia knew from a young age he wanted better than what he saw around
himself growing up. Raised by his grandparents, Mafia was always
encouraged to have strong work ethics, and to demand his just dues.
Mentored by his granddad, who played more of an immediate father role,
B Mafia learned the ways of life during their weekend bonding
sessions. “My grand dad was the coolest person, and very
knowledgeable, I would have to say that's where I got a lot of my
common sense and swag from.” On Saturday nights, his grand dad would
take him around the city, showing him 1st hand accounts of life’s
reality.

Around this time B Mafia developed an affection for the culture and
music of Hip Hop. “At this store on the northside that my grand dad
used to frequent, he would let me hang out and watch rap videos, and
do some of the things that grand-mom wasn't having at home.” Some time
later, B Mafia would learn to use lyrics to express some of his mixed
emotions, most importantly those stemming from his grandfathers
battle with failing health. ” Grand dad was my idol, he taught me
everything about life and being a man; seeing him go through it with
his health turned me cold, and instead of keeping it all inside, I
turned to writing about it.”

* Of course we had to share his music with yall. Check out his Single  SPAZZ below *