News: Philadelphia Traffic Court Judge Removed for showing his what??? 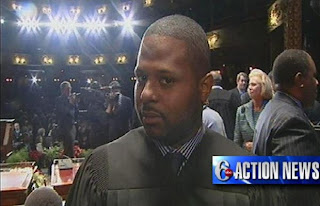 Willie Singletary (Traffic Court judge) was removed for showing a clerk what was under his robe... John Summers (Singletary's lawyer) claims that the pic being shown was a "a one-time, accidental mistake" and that his client resigned in February and has moved on with his life.

Sources say that Willie and the woman were sharing pictures and it accidentally popped up on his screen..That possibly could have happened but sources also say that he asked her if she liked it.. Sounds like the judge was trying to put the moves on somebody and got put on blast lol..What do yall think??

By Bam1987tv July 16, 2012
This has been a really good week for me and Bam vs Media. One of the reasons is i got to do a interview with one of my new favorite artists which goes by the name of Justin Garner. Below is the quick question i got to ask which lets you learn more about him as a person and as an artist. Also Make sure you get his latest Project I AM which drops tomorrow on Itunes and Amazon.   BVM: WHAT'S THE FIRST SONG YOU EVER REMEMBER HEARING? JG: Hmmm let me think. The first song I remember paying attention to as a child was “Sail On” by The Commodores. BVM: WHAT ARE YOU LISTENING TO LATELY? JG: I’ve been listening to the Civil Wars, Lana Del Rey, Chris Brown, The Arrows, Maroon 5, and Kanye. BVM: WHAT'S YOUR FAVORITE ALBUM BY ANOTHER ARTIST? JG: Easy. I have two though. Confessions by Usher and Rocksteady by No Doubt. BVM: HAVE YOU EVER BEEN COMPARED TO ANY OTHER MALE VOCALISTS? JG: YES! I get compared to Usher, Jason Derulo, Chris Brown, and Trey Songz. Not m
Post a Comment
Read more

By Bam1987tv November 08, 2010
as a dancer I hate to even type this but choreographer to the stars Shane sparks will be going to trial soon for 8 counts of child molestation. Smh followed by WTF dude Shane was taken into police custody in Los Angeles on a felony warrant last December and later released on $590,000 bail. (that's why Omarion was a judge last season) According to the criminal complaint filed by the Los Angeles County District Attorney’s office, Sparks allegedly committed lewd acts upon a child in multiple incidents between 1994 and 1997. This March Sparks pleaded not guilty to six counts of lewd acts on a minor and two counts of oral copulation of a person under 16. His defense attorney, Steve Meister, has branded the accusations “extortion, Hollywood style”. Last Monday November 1, a Los Angeles Superior Court judge ruled there was enough evidence for the 41-year-old to stand trial. he better get his eight counts down to be evading bubba an pookie in the pen. [Posted with iBlogger from my iPhone]
4 comments
Read more