Artist Spotlight: Grimlock (@GRIMLOCKP71) / Back Against The Wall 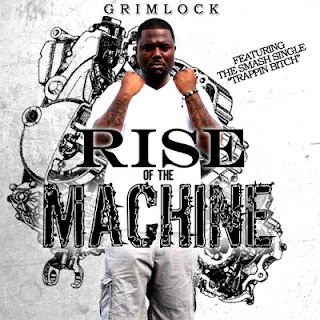 Donnell Lamar Jones, better known by his stage name “Grimlock,” is a unique sounding artist hailing from North Philadelphia’s Francisville area. Grimlock’s commanding voice and rap style captivates listeners as he delivers every bar to every verse. Grimlock has appeared on numerous mixtapes throughout the Tri State area and even hosted his own mixtape titled “Like I Should.” Grimlock is currently featured on Global Domination mixtape and set to release his first album titled Rise of the Machine, with includes the smash hit single “Trappin.”

Grimlock’s love for music started during his childhood when he would imitate rap artists, recite their lyrics, and dance while family members cheered him on. Grimlock molded and perfected his form before emerging on the scene as a rap artist in 1995. Grimlock would record songs on a tape deck while his friends would make beats for him by banging on things. It didn’t take long for people to recognize his talent and budding potential. More and more people began to request verses from Grimlock and his love of the art and reputation started to grow.

Growing up on the tough streets of Philadelphia, Grimlock was known for having a fierce attitude and it is evident in his lyrics. When you listen to a Grimlock track, you can hear the energy he delivers into every line. Grimlock’s ability to connect with each and every listener is like no other. His lyrics evoke the listeners’ sense of imagery and makes them feel the things he felt while writing the song. He has the ability to make listeners see the things he is actually talking about. Descriptive, eloquent, and always real, his songs will make you feel as though you are in a movie. Grimlock talks about real life issues and gives advice on how to deal with them. In his own words, “if I did not live it, well then I can’t spit it.”

As a rapper and as a fan of the genre, Grimlock is an artist who is dedicated to providing his listeners with the best music possible. He is driven to be better than his last record and you can hear his determination and impeccable work ethic in each of his songs. His goal as a rapper is to create music that will fascinate and inspire his audience to reach for the unattainable and make it reality. Through tireless grinding and promoting, Grimlock has become one of Philadelphia’s fastest rising rap stars. His work speaks for itself, and once you listen to Grimlock, there is no stopping; you will want repeat his songs all day. As Grimlock would say, “to me, rap is not a game so as you can see, I ain’t playing.”


Check out a track from him below: