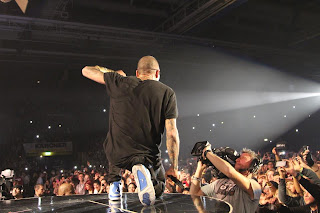 So breezy gets caught up in some drama again on twitter? SMH I swear some people bother him just so he can blow up and they can blog about it. But check out what happened when @JennyJohnsonHi5 sparked the match with this tweet below

Now many say breezy was wrong for responding but I mean he is human so it happens when somebody tweets you something like that. Now keeping it going  afterwards was uncalled for. And he tweeted this