News: Republicans Want to Boycott over a hug?? 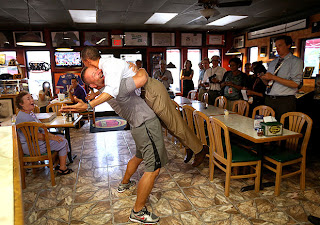 Here is Scott Van Duzer a Big Apple Pizza & Pasta Restaurant Owner in Fort Pierce, Fla who is now being targeted by the Republican party. Why you might ask? Because he hugged Obama ( Face Palm) and is Republican


Since then he has been catching the backlash from fellow republicans who are now slandering his name and his business.

Check out some below:

Well.. I'd eat there but after seeing the owner grab our leftist President I felt compelled to disrespect his establishment as much as the President disrespects our constitution. Shame on you Scott Van Duzer for thumbing your nose at all the small business owners this President has disrespected for the last four years. I guess you DIDN'T BUILD IT!


A republican who obviously likes the idea of same sex marriage. Shame, shame, shame! Traitors are in it for the money, so what are you getting?


I will never go to this place again. After seeing this so called Republican hug Obama, I've lost my appetite.

I would never let Barack Hussein Obama enter my business. Of course since Chairman Obama thinks I did not build it, he would probably force his way in. This "American" president has done more damage to this country than the hijackers on 9/11. Stay out of our small businesses, Mr. President. In fact, keep your hands off our health care, guns, religion, and values.

The calzones are fantastic.

The posts on this mans business are disgusting to me. All of this because he let THE PRESIDENT into his store? I mean who would say no to Obama (Besides these crazies above) Yelp should
have those comments removed because they have nothing to do with his customer service or food smh