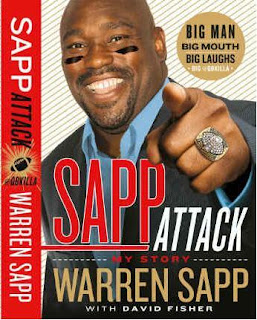 Big Man. Big Talent. Big Star. Big Mouth. Big Heart. Big Personality. Big Smile. Big Headlines. Warren Sapp, one of pro football’s most dominating defensive players both on and off the field, has a reputation for being bold, brash, knowledgeable, and outspoken. During his All-American career at the University of Miami, 13 seasons as an NFL star, four years on the NFL Network and one very big season on Dancing with the Stars, Sapp has never held back. Now he brings that same fearless attitude to his memoir, a book that will create controversy and headlines; in other words, pure Warren Sapp.

Bam Commentary: Its a dope read and if you aren't a Sapp fan his brash personality is going to offend ya lol. But on the real its a good read that will alter your view of the Game right now. Check out these Reviews So far.

“Warren Sapp is one of the greatest characters and best storytellers I've ever come across in this business. Add in the fact he's one of the most football savvy champions of all time and you've got yourself a must-read book.” --Rich Eisen


“Sapp, the most colorful, most discussed athlete in Tampa Bay history, is on another one of those brutal, relentless rushes again. One more time, he is loud, and he is profane, and he is stepping on a different set of toes every time you turn a page… Uncensored and unapologetic, from the bounties at Miami to the turnaround in Tampa Bay to the final days in Oakland. It is as raw, as boisterous, as loud as Sapp himself.” –Tampa Bay Times

“With his outsized personality, Sapp, a former defensive star with the NFL’s Tampa Bay Buccaneers and Oakland Raiders, assisted by David Fisher, pulls the covers off the professional gridiron league in this blunt memoir with gleeful tidbits about the greats of the game he loved… Chatty, revealing, and always candid, Sapp’s memoir takes the reader inside himself and the roller-coaster smash-mouth ride of the NFL.” –Publishers Weekly

Go Get your copy now