Wayne Brady wants to slap the sh*t out of Bill Maher?? 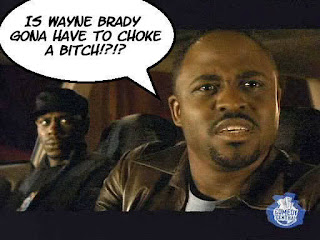 One of Maher’s complaints about President Obama is, apparently, that he’s not aggressive enough as President. Fair enough – that’s a common complaint among liberals. However, Maher phrases this complaint in a (to put it charitably) risque way – specifically, by complaining that Obama doesn’t act enough like a stereotypical scary black man, instead acting more like a “Wayne Brady” figure. Never mind that these are both stereotypes, and that if any of Obama’s conservative critics said this, they’d be vilified to the ends of the earth. Right now, that‘s the least of Maher’s problems.


Now Wayne Brady has heard it and has chose to respond. Check out what he has to say in response

This had me laughing yo. When he said "and Fancy who also happened to be named Tyrique at one point." he did his homework lol

By Bam1987tv August 05, 2011
Bam Commentary: They are beyond dope. The lights + choreo = breath taking performance..Make sure you vote for them on America's Got Talent right now
4 comments
Read more

By Bam1987tv August 13, 2012
It has been a long journey for singer David Correy. No matter what obstacles have been thrown his way, he has kept on pushing. His story should help inspire us all to never give up on something you love. He has been hard at work over the past several months working on his new S'ANIMER EP. It is time for the world to here and see this young mans remarkable story. As he would say, you gotta "Go hard or, go home!"