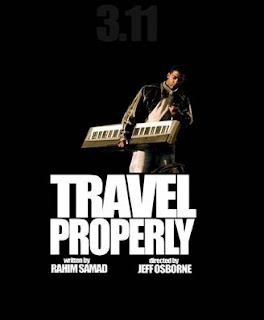 Travel Properly: the Movie is a film that follows the lives of two young men, one on the cusp of stardom and the other down on his luck, as their lives intertwine and a job leads them down an unexpected path.

Travel Properly is an independent film that was written, produced, directed, and shot entirely on location in Tampa, Florida. The film stars Colin Felder, Akil Morehouse, and Hip Hop artists Rahim Samad and Funkghost. The fim features the directing artistry of Jeff Osborne. As well as portraying the lead role, Rahim Samad composes the soundtrack, wrote the script, and helped produce the film. Travel Properly is full length film that will be released on November 7th, with screenings in select theatres throughout the United States.

As a director in Tampa, Jeff Osborne has set the bar for local music videos. He directed all of Rahim Samad’s videos, several of Funkghost’s videos, and recently, local “Femcee” Dynasty’s music video featuring the legendary DJ Premier. Rahim Samad is a well established rap artist and member of the Tampa hip hop community. He is also the  producer of the entertainment show RighteousDisorderTV. Rahim chose to collaborate with Jeff Osborne to create an artistic film of the highest caliber, which will be submitted to many film festivals. This film is anchored in the local music community, even featuring a prominent punk and metal venue, Unit 19, with many members of the punk and metal music community making appearances. The role of the artist Funkghost, who has been writing and producing locally for over a decade, further strengthens the ties between this film and Tampa’s music scene.

Movie to be Released November 7th