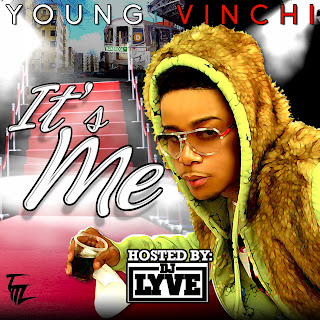 Get The Mixtape Now

You know the drill when most unsigned new artists drop a mixtape: disappointing generic-
sounding music, tired themes, lame lyrics, fake bravado on the visuals. But then, every so
often, a new rapper hits the streets and just like a tasty cheeseburger, the more you bite off
and chew, the better he gets.

Put your order in now and make it official; “It’s Me” by Young Vinchi is 2012’s best- kept
tasty secret. No need to take the D Train uptown to the Bronx’s Bainbridge Avenue to get
it, Young Vinchi – with his clever rhymes, sly imagination and hype J Staffz beats - brings it
to you .

“It’s Me” – hosted by DJ Lyle of BET’s 106 and Park - appeals to all your senses of
having fun, looking good, feeling good, being young at the club: smokin’, drinkin’ and
thinkin’, chasing “Shaquana and Shaquita”, and getting paid. The music - layered sonic
arrangements of speaker-rattling percussion bombs, horns and keyboards- is a human
bobble-head soundtrack.

Not one to waste time, Vinchi kicks off his inaugural 43- minute mixtape with “Get Your
Hands Up,” a direct order to get ready for the trouble he’s about to make.

Released by NYC’s TroubleMaka Records, Vinchi’s songlist slickly crawls to a steady
momentum with “I Want The Cash,” “My Style,” “All I Ever Want” and the steamy“Baby
Girl.” The 25-year-old Bronx native’s swagger is relaxed, his raps are mature and mannish;
ready to make most women swoon. If heart-throb actor Terrance Howard had a rapping
little brother, it would be Young Vinchi.

The “It’s Me” set then makes a sharp turn and speeds up. If you - or the DJs at Sin City,
Magic City, Jersey Shore or Madison Square Garden - need a couple block-hugging anthems
for this summer, you’d be good to download “Black Girls” and “Bent Behind My Tint.”
Vinchi boy turns up his staccato, Tommy Gun lyrical delivery while celebrating the joys
of hood chicks, roll-ups and Goose. Don’t catch the flu while listening to these songs’
infectious beats; the flexing synthesizers, high-hat snares, Island reggae bass, conjure up
smoky fantasies of those Twerk Team girls.

Young Vinchi was born Albert Neysmith Jr. on May 31, 1987 to Jamaican parents and
raised in the Bronx, N.Y. by a close-knit family. He began rapping at age 8 to entertain
his friends at school and by the time he got to Banana Kelly High School, he was the
designated “interrupter.” Like all entertainers, he developed a craving for the attention
offered by the stage. He soon entered the school’s fashion and talent showcases where he
fine tuned his showmanship and savoir faire.

After graduation, Vinchi attended LaGuardia Community College and studied theater and
communications. He also begain performing at open mics and small venues around the
New York metro area collected first place prize money and trophies. In 2007, he moved
to Atlanta and worked with a number of up and coming producers that helped season his
style.


In 2011, Vinchi, guided by his TroubleMaka management, entered into a smash
collaboration with J Staffz, the young and talented producer from Toronto, Canada. As one
of hip-hop’s hottest new producer, JStaffz has worked with Wiz Khalifa, Yung Berg, G-Unit,
40 Glocc. His work on “It’s Me” is melodic, harmonious and explosive. The post-production
mastering is crisp, clear and high quality.

And yeah, let’s get back to the music.

Showing that the balance of this mixtape is versatile and radio friendly - Young Vinchi
serves up a several stout R&B-flavored cuts including “Left Arm”, “Diploma”, “BLC”, “Talk
To Me”, and “Hating” were he spits this one line: “Vinchi is the general, and TM is the Army;
Smoking on that weed, the same color as Barney.”

No matter if you listen to Young Vinchi in a Hennessey, smoke-filled room at the crib, in the
club, or on the highway, you will be impressed by the skill and originality on display on “It’s
Me.” The rap game has an exuberant fresh new face, an entertaining player who’s put in
work, been patient and is now ready to graduate to hip-hop’s “big boy” ocean.