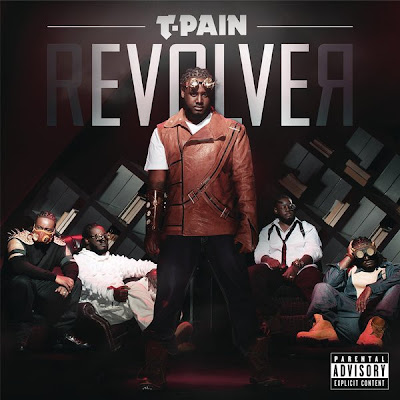 T-Pain is at it again. After landing another platinum selling radio hit single with "Best Love Song," featuring Chris Brown, followed by quickly rising single "5 O'Clock," featuring Wiz Khalifa and Lily Allen, singer/rapper/producer T-Pain announced that RCA Records will release his fourth studio album rEVOLVEr on December 6, 2011. The follow-up to his 2008 platinum-plus selling album Thr33 Ringz, rEVOLVEr (visually spelled as rEVOLVEr for a reason), demonstrates the evolution of T-Pain as an artist.

"rEVOLVEr is drawn from seven albums' worth of material," said T-Pain. "There are so many different things on this album. I couldn t settle on what I wanted to include, but the final result I think will really hit all of my fans and different audiences," says the singer. "I've developed a new audience from the Taylor Swift stuff, the Bud Light and Toshiba commercials, the T-Pain Mic and App. There is music for everyone on this album, but definitely still classic T-Pain at the same time."