Why is DCUO down right now??

By Bam1987tv September 01, 2011
For all my fans of DCUO the server is down right now so they can some new updates.. And the gamer in me had to find out why so this is what i have come up with so far..

• Gear should now be consistently better as you progress from Duos, to T1 Hard Mode Alert loot, to Tier 1 marks Gear, to T2 Hard Mode Alerts/Raids loot, to T2 marks Gear to Tier 3 Raids loot and finally to Tier 3 marks gear.
• Fixed the Tier 2 Alert Dominance requirements which were too high.
• Adjusted the stat allocations on a number of items that had extremely unbalanced amounts of Might, Precision, Restoration or Vitalization.
• Stats on all Epic quality Tier gear purchased with marks have been increased.
• Stats on Tier 1 and Tier 2 Epic quality PvP gear have been increased.
• Stats on the Tier 2 Hard Mode Alerts have been increased.
• Stats on the Epic quality Tier 1 Hard Mode Alert gear have been decreased.
• Minor adjustments were made to the stat allocations of other gear.
• Trinket effects no longer apply growth and will no longer interrupt combat with a forced revert to normal animation. They no longer apply flat percentage bonuses but apply a flat bonus based on the tier they are earned.
• Optimizations and various fixes to improve client stability


• The following abilities no longer stack with themselves: Downdraft, Inferno, Wintry Tempest and Circle of Protection in damage role
• Reduced the damage penalty for being in healing role to 25%.
• Tank Role: Burning Determination, Winter Ward, Burnout and Shatter Restraints now all remove and prevent Controller debuffing effects for eight seconds and apply five seconds of Breakout.
• Control Role: Debuffs applied by Stasis Field, Thought Bubble and Horrific Visage will now properly persist after the target breaks out.
• Iconic Powers: Amazonian Deflection now adds 5000 Defense and Toughness rather than a flat amount of Mitigation.

Fire
• Increased the cool down of Meteor and reduced the length of time the meteor object remains in the world.
• Fire tank secondary health buffs should no longer occasionally bleed over to group members.

Gadgets
• Gadgets turrets will now attack targets recently damaged by their owners rather than whatever they are most angry at. This means they will no longer sit there brooding over subdued targets that can no longer be attacked.
• Stasis field now properly states that it reduces defense while in Control role.

Martial Arts
• Corrected an issue with Shuriken Storm and adjusted its damage to bring it in line with other ranged combos.

Mental
• Pyrokinesis now properly states that it reduces healing while in Control role.
• Telekinesis no longer applies a Defense debuff bringing it in line with other 1st rank controller powers.

Sorcery
• Transcendence is no longer vulnerable to interrupt mechanics.

Dual Pistol
• Full Auto will now cause damage to targets it block breaks. This only block breaks your current target and the block break is no longer a continous effect.

• Precision and Weaponization scores are now better balanced to be more in line with Might scores.
• Health was increased for all Legends characters.
• The Legends Soder Cola amount of healing has been increased.
• De-buff effects were removed from Legends character abilities. Unlike player character PvP where there are mechanics in place to allow the removal de-buffs, there are no such mechanics in place in Legends.
• Block breaking effects were removed from Legends super powers, as block breaking is only intended to be possible with weapon attacks.
• Cool downs and deploy times on many abilities were adjusted to bring them in line with similar abilities.
• Balanced the damage on abilities that were dramatically out of scale with other abilities.
• Abilities that did not cause damage now do, and scale with other abilities of that type.
• The Legends Joker character now has acrobatics while using the 1-handed weapon.
• The Legends Joker and Two-Face characters will now call all three of their goons instead of just one


• PvP Weapons with slow animating Block Break abilities are now also able to Block Break with their ranged tap abilities too after they have purchased their regular block breaking ability. However, their range tap abilities are now immediately vulnerable to interrupt instead of being vulnerable only after repeated use. This change affects Brawling, Dual Wield and Two handed.
• Tier 2 PvP weapons now add 352 Precision when used against players rather thn a global damage buff.
• PvP trinkets now remove both regular and role specific PvP debuffing effects applied by player super powers.
• The Moon (5v5): Fixed an issue that could allow players to move at full speed while transporting the unstable element on the Moon.

• Increased the difficulty of NPCs in the Fortress of Solitude level Raid.

• Falcone Warehouse: When releasing Falcone Thugs they should now say one of four lines instead of the same line repeatedly.
• East End Lighthouse: Fixed an issue that was causing clients to crash.
• John Bolaris is back and can be found again in the Tomorrow District.

• Healers can now get the Back piece for the Seraph style set from the Smallville T1 Alert.

• League names should now appear overhead immediately after forming a League.
• Fixed a bug where the group member Mini Map icon would sometimes not show up when a group member phased.

AND ONE MORE THING 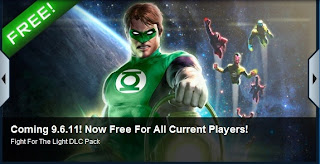