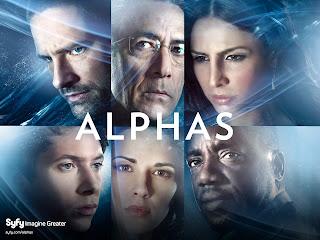 Officially my new favorite show on Syfy. What is Alphas you may ask???

Alphas is an action-packed thriller from writers Zak Penn (The Avengers, X-Men: The Last Stand) and Michael Karnow. In the series, five ordinary people are brought together to form one extraordinary team of Alphas -- people with the unique power to stretch the capabilities of the human mind giving them superhuman physical and mental abilities.

Operating within the Defense Criminal Investigation Service of the U.S. Department of Defense and led by preeminent neurologist and psychiatrist Dr. Lee Rosen (Emmy Award-winner and Academy Award-nominee David Strathairn), an expert in Alpha phenomena, the team investigates cases that point to others with Alpha abilities. As they work against the clock to solve this new brand of crime, they must prevent their own personality differences and disparate backgrounds from interfering with their ultimate mission to catch the enemy.

Here is the Team:

Dr Lee - Leader of the group. No he's not a alpha lol

bad side: He can only use it for a short time frame.

Bad side: His alignment needs to stay constant or his ability will crash..

Bad side: Anybody that knows of her powers never know if she is genuine or controlling them.

Gary Bell - transducer - He can read a wide range of frequencies including television, radio, and cell phone signals in the same way people typically hear the everyday sounds around them.

Bad side: He can't turn the signals off at times

Rachel Pirzad - synesthete - She can super enhance one of her senses.

Bad side: It completely dulls her other senses when she uses her gift.

Bam Commentary: The pilot was the truth from start to finish. It really kept my attention the entire time it was on. (Just ask my twitter timeline lol) It had action & suspense which will make it a force to be reckoned with on Monday nights. I am wondering how they are all going to come together as a team with the melting pot of personalities they have.Examples: Rachel dealing with Bill's issues with boundaries, Gary and bill, and is there chemistry between Cameron and Nina? But I'm not going to ramble to much about it. Watch a episode and let me know what you think.