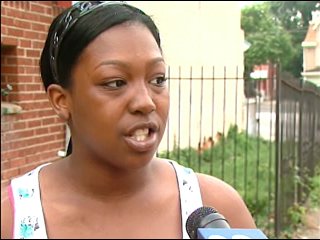 A Philadelphia teenager is lucky to be alive after she was attacked at random and nearly thrown onto the SEPTA tracks in Center City.
Courtney Wilcox, 17, tells Eyewitness News she was targeted at random by a stranger at the Walnut-Locust station.
"I saw my life flash before my eyes," said Wilcox. "It was scary."
Wilcox was standing on the southbound side of the station after a day of shopping with her sister-in-law when 33-year-old Alex Alia allegedly tried to push her into the path of an oncoming train.


"He grabbed me from the back and I grabbed his book bag that he had on and I swung myself around so I could push him off of me," she explains.

Wilcox says she only had moments to spare before the train sped past and there were no other SEPTA riders on the platform when the attack happened.

"It was 10 feet away and it was still moving, If I didn't fight him off I would've been dead down there."

The teenager was able to break free and contact SEPTA agents for help.
Alia was arrested at the scene and the entire incident was captured on surveillance video.
Sources say Alia has a lengthy criminal record consisting of as many as 35 prior arrests.

Bam Commentary: We need to do better. I mean wtf could she have possibly done to nearly lose her life? In my opinion somebody should thrown dude on the tracks smh.