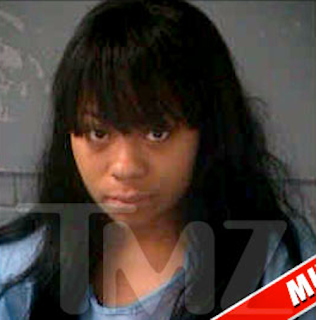 Before the incident lets get this out the way first. Nivea was at lil waynes first baby moms (Toya) wedding reception. Lil waynes third baby mom lauren london was also in attendence. All his baby moms hang out with each other?????


Here is how the police explain the situation:


Nivea was on the road around 1:30 AM on Sunday when she plowed her '06 Mercedes right into a tree that had fallen into the road during a recent storm.

We're told when cops arrived at the scene, Nivea had "bloodshot, glassy eyes and smelled like alcohol." Nivea told police she only had 3 drinks earlier in the evening ... and didn't see the bright yellow crime tape and the traffic cones directing cars away from the downed tree.

Nivea was eventually arrested on suspicion of drunk driving and reckless driving. We're told the child in the car was not injured and was released to Nivea's boyfriend.

As for Nivea -- sources close to the family are adamant she was NOT drunk, or speeding, at the time of the accident.

Thank You 2 all that were concerned, I’m doing fine! I NEVER said what ppl r saying I said to/about the cop by the way. Its just unfortunate how the Media & Law can be used against you when you don’t know enough about the way they work. Again, thnx 4 all the ?. And one more thing, I WAS NOT DRINKING AND DRIVING, the accident was Not due to me being intoxicated. Just wanted to clear that. Ppl who start/assist rumors should go get their mom and tell her to SLAP THE URINE OUTTA THEM! #thatisall Aaaaaaaaaannnnnnnd I’m out