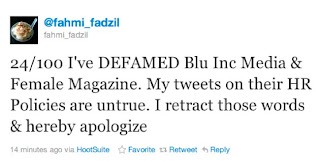 A social activist in Malaysia attempting to shine a spotlight on a magazine publisher that allegedly mistreated an employee has been reprimanded in a most unusual way. In punishment for Fahmi Fadzil's offenses, which include defaming Blu Inc. Media, a judge has sentenced him to apologize to the company 100 times onTwitter. The charge initially stemmed from a claim Fadzil made that a female friend of his was being mistreated by the employer, which he posted on Twitter a few days earlier.

The tweets, which Fadzil has 3 days to complete, read as follows: "I've DEFAMED Blu Inc Media & Female Magazine. My tweets on their HR Policies are untrue. I retract those words & hereby apologize." Each tweet is also numbered for what we imagine is the benefit of anyone monitoring the sentence being carried out.

Public forms of punishment aren't unheard of, and some judges here in the United States require shoplifters and other petty criminals to wear signs announcing their crimes to the public. But taking a public apology sentence to a social network is a rather new angle, and one that may not only work in Fadzil's favor — by drawing attention to his original claim — but also seems to be making him into a bit of a social networkcelebrity.
Bam Commentary: Twitter is never gonna go away after this lol.