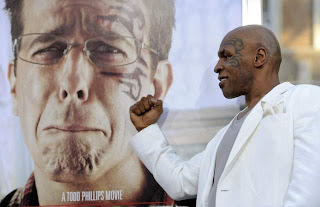 The tattoo artist who sued over Ed Helms’ tattoo in “The Hangover Part II” has settled his lawsuit over the design, which resembles the facial ink the artist created for Mike Tyson.
Warner Bros. spokesman Paul McGuire said Monday that the movie studio and S. Victor Whitmill amicably resolved their dispute. McGuire declined to discuss the case further.
In the movie, Helms’ character, Stu, wakes up in a Bangkok bathtub with a facial tattoo.
Whitmill claimed the filmmakers ripped off the design that he tattooed on Tyson in 2003 in Las Vegas. Whitmill now lives near Waynesville in south-central Missouri.
The lawsuit filed in federal court in St. Louis tried to block the film’s release, but a judge ruled just two days before the film’s May 26 debut that it could open as scheduled.
Source
Bam Commentary: Who didn't see them settling quick with this dude?