I would just like to say who gave this chick a twitter? If you haven't already figured it out kola boof is bin laden's old lady (girl). Apparently she can't stand Wale so she took to twitter and let him have it. Here is what she had to say

“I don’t like @wale because he’s another Colorstruck Black Man who’s videos are pretty much White Supremacist images,” she tweeted. “The fact that @wale is Nigerian makes it all the worse, because he’s setting the wrong example globally for our race. A loser. There wasn’t a single Black woman in ‘Pretty Girls’…so what in the f-ck was he saying about African women?? His own race? @wale and all the rest of these Self-hating N*ggerstock Bastards don’t celebrate Black Beauty bec. they can’t C it.”

I'm confused if we watched the same video cause I saw a nice variety of races and sizes in his video. We all know Wale caught word of this and tweeted his response:

"I can sit up here and say you were porking terrorist like a lot of your peers say. But I’d rather not, because I’m ignorant to whatever relationship you had with Ol’ Boy (bin laden)and my ignorance to THAT particular subject will keep me quiet."

She got her couple minutes of fame with that one smh. 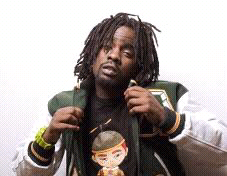