David Yost was one of the original "teenagers with attitude,"(you know that name if you were a ranger fan) playing the nerd of the gang Billy. Or you may know him as the the guy in the suspenders lol. David ran with the power ranger series for 3 straight seasons before leaving. He has finally decided to say why he decided to leave the franchise.

i walked off set one day, during the middle of lunch, halfway through the day. I had made a decision I had been thinking about for a good week, and the reason I walked off is because I had been called faggot one too many times

He said he had been called gay slurs numerous times from

and his co-stars had even been called in the producers office and questioned about his sexuality.

After David revealing this information it took twitter by storm as you see here: 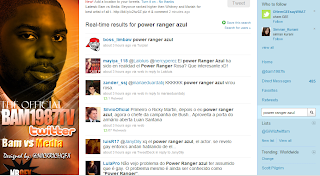 Anything to say readers?

By Bam1987tv August 22, 2012
Keke Palmer is not playing with yall. She dropping another song and video in the next coming week. check out the song below and the behind the scenes where you can check out her new dance move Really impressed with her dance technique
Post a Comment
Read more