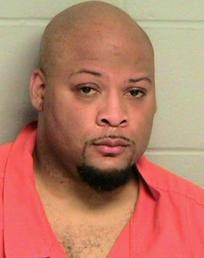 Meet Kenneth Bernard Williams, 31, of Atlanta. Williams was arrested and is being held without bond after he was caught sneaking out of the window of a 14 year old girl.
According to reports, the girl’s mother called the Rockdale Sheriff’s Office around 4 a.m. after hearing footsteps in her daughter’s bedroom.  The teen had sneaked boys into the house before.
When one of the responding officers accompanied by the mother, knocked on the girl’s bedroom door, a shoeless Kenneth Bernard Williams, scurried out the window where he was caught by a second Rockdale officer who was waiting outside.
Williams was carrying six condoms and was promptly arrested by the awaiting deputy. After denying any sexual encounter had occurred, Williams explained that


According to the young girl, she and Williams met a few months ago after he dialed a wrong number and reached the 14-year-old on the other end. Williams asked her, “are you legal?” and she says she told him she was “only 13.” She also told deputies that she and Williams had sexual intercourse.

Williams denies having had sex with the minor, and claims that the girl told him she was 18. He’s been arrested and charged with child molestation and sodomy and is being held in the Rockdale County Jail without bond.