Lebron Breaks His Silence on Gilbert 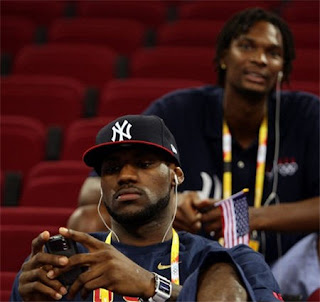 LeBron James has finally decided to respond to the comments made by his former team owner, Dan Gilbert.

Last week after LeBron made his announcement that he'd be playing with the Miami Heat, Gilbert wrote an open letter to Cavaliers fans, calling James' decision "a cowardly betrayal' and referred to him as "a former hero'' and insinuating that he was self serving.

Gilbert also called the way in which LeBron made his announcement which was televised as a “shameful display of selfishness and betrayal.”

"To hear my former owner's comments, I absolutely know I made the right decision. I don't really have a reaction to what Dan said. When things hit the fan, you see a guy's true colors. I have no reaction because at the end of the day, Dan's comments won't stop me and my family from sleeping at night. It just won't do it. It's just going to make us powerful, more powerful.''

National Basketball Association Commissioner David Stern was also not impressed by Gilbert's letter as he was assessed with a $100-thousand fine. Stern stated,

"I think that remarks by Dan Gilbert, the owner of the Cavaliers, catalyzed as they may have been by hurt with respect to the manner and the fact for himself, his team, and particularly for the people of Cleveland, though understandable, were ill advised and imprudent. I have notified Cleveland that they will be fined $100,000 for those remarks under my power as Commissioner."

Bam Commentary: Dude gave lebron more air time then he got for signing with the heat. I dont think that fine will hurt him at all but I think the drop in his team value since lebron left will. What do you think?