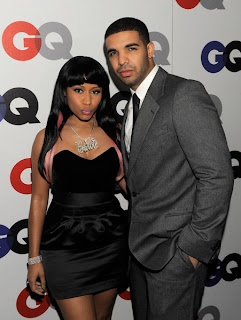 I knew this day was gonna come soon.But damn not this soon lmao.. Last night Lil Kim called in to Philly ’s The Beat with Kendra G and allegedly fired shots off at Nicki Minaj. That same night Drake and Nicki Minaj hit the stage in Hartford CT for 93.7’s Hot Jam. After they performing “Bedrock” Drake opens his big mouth sayin, “Can I say something to the crowd in Hartford?”. This is supposedly what Drake had to say about the whole thing.


Drake said “I don’t give a f*ck what Lil’ Kim or nobody else talkin about, you’re tha baddest chick to ever run this sh*t!” Right before that Nicki had been saying how she’s the baddest b*tch in the game. Drake stopped her and said something along the lines of “I respect you too much, so I’m not gonna call you the baddest B*TCH in the game, I’m gonna say you’re the baddest WOMAN in the game.” After he dissed Lil’ Kim, Nicki turned around laughing, then came back and hugged him. He told her “I love you.” Then he left the stage.

Bam Commentary: I mean seriously drake was it needed? If anybody should of said something it should of been Nick. Am i right? Cause anybody with 2 eyes can see she a lil kim carbon copy. Only difference is she fuck wit chick. But everything else is the same. Or am i the only one that see's this? Exhibit A: 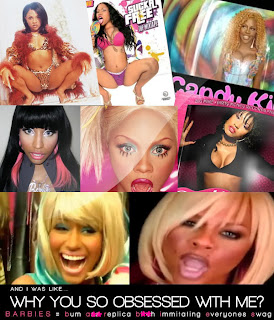 Now i aint bashing im just stating visual facts. I dont think this ish will last long at all as long as other party members (ray j, drake), and whoever else that isn't kim or Nicki stays out of it.. After hearing the audio Kim said it flat out "We love her..we just want her to show respect so we can rock out together" I see it as a rank check from a vet in the game to a rookie. I give nicki her respect that she did land slide the game. But on the real Kim did it first... rather it be the wigs, outfits,Swagg, even the trademark "Barbie".