WTF of the day: dad beat 7-month-old son to death 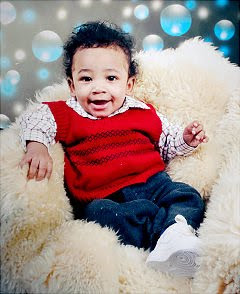 Jealous that his son "preferred his mother," a Queens dad fatally beat his 7-month-old, the latest in a rash of violence against small children in the borough, officials said Wednesday.
"Toughen up!" Larry Greene yelled at the crying child before punching him in the chest, prosecutors charged.
Xiah stopped breathing moments later, and died Tuesday night at Queens Hospital Center, the fourth child in the borough to die at the hands of a guardian in five weeks.
"We're grieving right now," Pierre Nady, 47, the victim's maternal grandfather, said Wednesday. "Xiah was only 7 months old - he was a cute, little boy [and] he was loved."
Xiah had a bruise on his scalp, two bruises on the neck and five bruises on the chest that showed imprints of an adult's knuckles, officials said.
The child's mother, Cassandra Nady, asked Greene, 20, who lives nearby, to watch Xiah at her St. Albans home.
"He said the baby fell when he was feeding him but it wasn't even close to the truth," said Nady.
Prosecutors said they have a videotaped confession from Greene, who admits hitting his son - and told them he was upset the boy "preferred his mother."
Greene's shocked sister refused to believe he could be such a monster. "Larry is a good person, he wouldn't do anything like this," said Laquana Greene, 25. "It's a misunderstanding."
Greene was charged with second-degree manslaughter yesterday and could face up to 25 years to life in prison if convicted.

Bam Commentary: This makes me sick to my stomach.

WTH Of the Night: