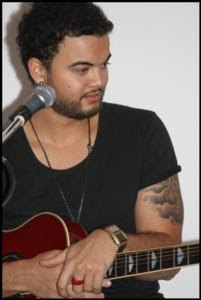 Guy Theodore Sebastian (born 26 October 1981) is an Australian singer-songwriter, and winner of the first Australian Idol television talent quest in 2003. He has released four top 4 albums including a No.1 and No.2, which all achieved either platinum or multi platinum accreditation. His fifth album Like It Like That was released in October 2009, debuted at No. 6, and achieved gold accreditation in its 3rd week. He has also released six top 10 singles which includes four No. 1's, and three other top 15 singles. He has 19 platinum and 3 gold accreditation's for albums and singles, the highest accreditation's of any Australian Idol contestant. He has sold over 1.5 million CDs in Australia alone, including more than 800,000 albums.His awards include Channel V's Artist Of The Year in 2004, and Urban Music Awards for Best Male Artist in 2006 and Best R&B Album for his third album Closer To The Sun in 2007.

But Now that you have some background lets get to the singing:

Bam Commentary: Dude can sang hands down...But what do you think readers??? You can get his music by clicking the pix below

Closer to the Sun