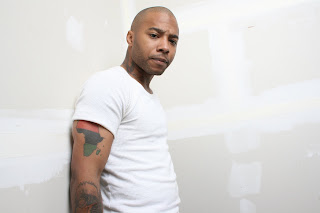 KORNBREAD! THE LAW OF ATTRACTION IN ACTION!) Possessing the creativity and showmanship of a true emcee Kornbread aka Ricardo Rivira aka Mr. PHIRDAYFIHSFRY(yes hes a gemini) posses the true essence of Music by way of HipHop! Having been a student of greats from Parlimentfunkadelic to Outkast devin the dude to the BACKYARD BAND EU RARE ESSENCE CHUCK BERRY from ZAPP to Tupac from getoboyz to ice t to GANGSTA NIP TO NWA TO Busta rhymes from Lenny Kravitz to Earth Wind and Fire and rapping, b-boyn, graphn and acting since he was able to utter sound and scoot around. Landing a small role as Otis' younger brother in the Temptation movie and a small part in the Jackson movie and landing a Record deal with Def jam, with one record (and alot of carisma) "You dont want dat" produced by mike boykin (boykinbeatz llc) that was short lived (due to unknown factors) along with former rap partner Slim. 'Bread" has definatly "seen" alot!

A military Brat(Texas, Florida, Maryland/DC, Pittsburgh, Virgina, Philadelphia and Atlanta) is just a rolling stone where ever he laid his hat was his home, caught the attention of mainstream when he and slim were given the opportunity to write on southern Pop star Ciara's Hit record "Oh" (Dre Harris and Vidal Davis)(Bread can be heard on the adlib traks) Bread was also given the opportunity to write with Philly rap star Eve,One chance(ushers group), also collaborating with r&b singer/writter Latif,Marshia of floetry,Sterling Simms and Wanye of Boyz to Men. Bread caught the attention of the mainstream again while working on another hiphop stars album "The million dollar backpack " released in 2008 by SKILLZ. Bread wrote the hook on the song "BE ALRIGHT" and was also featured in the video! (Aries sang on the record aswell)


After a brief hiatus, kornbread has bounced back and teamed up Matrax, Kornbread is just moving at the speed of success, and is set to bring his deep passion, profound pain, penetrating joy, tears and smile to the world of not just hiphop but MUSIC PERIOD! (KORNBREAD!THE LAW OF ATTRACTION IN ACTION) ITS NOT THE HOW THAT'S IMPORTANT! JUST THE FAITH!

By Bam1987tv December 07, 2010
Where are they now (From left to right) Billy - came out the closet Kimberly - Is still acting^ Jason - paramedic/personal trainer ^  Tommy - MMA Fighter^ Trini - R.I.P 2001^ Zack - Still acting. most recent work > Bank of America commercials^ Bam Commentary: Wow at how they all changed. They still hold the best season of power rangers in my opinion. It was alot of money issues behind the scenes and i see why they left. But the main ones who changed drastically is tommy and jason. they look like two different people.
Post a Comment
Read more

By Bam1987tv December 30, 2017
We at BVM got new music for yall coming from Baby Blue and it slaps in our opinion. It def isn't the Pretty ricky sound that some of us are used to from Blue so go into ready for a surprise. We recommend you play it at ratchet levels enjoy the musical offering of Cold Blue. Our favorites easily are "I Love My Wraith" and "Hot Boi" because I can easily here these two getting heavy club spins. Also get ready to Catch Blue and the rest of the members of Pretty Ricky on Love & Hip Hop coming in 2018. Check out Code Blue
1 comment
Read more