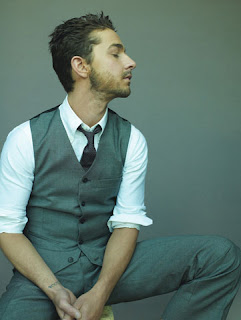 In the April issue of GQ, the always candid Shia LaBeouf lets it be known that he's still bitter about the way the media handled his widely-publicized car crash in 2008. Although he was initially arrested in Los Angeles on a misdemeanor drunk driving charge, a couple of days later it was announced that Shia was not at fault in the accident, which left him with a severely injured left hand.


"I'd be watching the news, and they'd play my car crash, and every once in a while Kim Kardashian's sister [Khloe] would jump on TV and preach to me from the red carpet about how to live my [expletive] life," he shares. The reality star, who served 173 minutes in jail for a 2007 DUI charge, had these words of wisdom for Shia: "Just be smarter," she told Us Weekly at a red carpet event. "Think about your actions and get a driver. It's so much cheaper in the long run!"


"And I'm so upset, man. I'm so angry," he tells GQ. "Because this accident was not caused by me. I got hit. I had a green. This [expletive] ran a red light. And he flipped my truck, and he shoveled it on my hand. And my fingers are in the street ... They're in the street, they're off, they're under the truck door, man. This is fake, dude," he says, lifting his newly reconstructed hand. "This is hip bone and the skin that was left over..."

Bam Commentary: Sounds like he really doesnt like Khloe's 2 cents on his situation. I would of laughed it of but i guess what she said really got to him that he chose to speak on it publicly like this. I wonder what Khloe response will be when she catches wind of this.