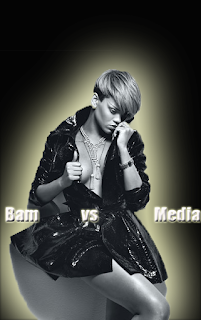 A Snippet of Rihanna's interview with Australia's Sunday Magazine:

What's the longest period of time you’ve waited for someone? Twenty minutes? An hour?

I start to get cranky around the five-minute mark, so imagine how grumpy I am after waiting four hours on a Sunday afternoon for the subject of today’s photoshoot to arrive. You know how a watched pot never boils? Well, let me assure you, a watched doorway never brings a Rihanna.

For much of the afternoon, I’ve been steadily receiving text messages letting me know that the singer won’t be long (“definitely within the hour”) until, finally, when the crew are weak with starvation, we’re startled into action by a flurry of voices. Striding at the front of the 10-strong pack is the surprisingly tall star, immaculately groomed in a simple white shift dress and giant sunnies (even though it’s 7pm). She takes the time to greet each of us with, “Hi, I’m Rihanna.”

Considering she’s only in town for a 72-hour promo tour, she has one hell of an entourage. There’s the manager, two assistants (one of whom heads for the stereo to blast the boss lady’s new album, Rated R, kicking off with the chart-topping single Rude Boy), the hair and make-up artists, the wardrobe keeper, the best friend and two drivers. They busy themselves taking over the entire studio space, while Rihanna squeaks with excitement at the designer pieces she’ll be wearing.

Bam Commentary: Wow at the statement an WTH you got to bring all them ppl for? lol. what do you think readers?