By Bam1987tv March 24, 2010
Inspired by Twitter messages to "come to South Street," police say hundreds - business owners say thousands - of young teens stampeded down South Street in waves, jumping on top of cars, knocking over pedestrians and fighting and cursing.

"It was like a tsunami wave," said a store employee.

"The cops were overwhelmed," said a store manager. 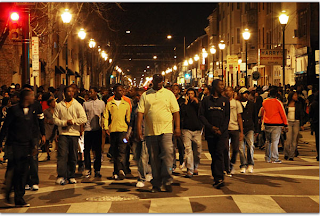 The South Street business owners called on Nutter to impose a curfew of 10 p.m. or earlier after frightened managers locked their doors, only allowing customers inside.
Nutter did not return calls last night.
Saturday's was the sixth flash mob to hit the city since last May: three on South Street; two in the Gallery, including one that spread to Macy's; and one along Market Street East that spread to the area near City Hall.
Several store owners and managers documented the stampede with cell phones or store surveillance tape.

A pizza shop owner said that some in the mob were chanting, "Black Boys!" and "Burn the city."

One youth was overheard on his cell phone saying: "Bring baseball bats to South Street."

After enduring months of street construction during a recession, then one snowstorm after another, business owners were delighted that customers had returned to South Street to shop, eat and stroll on the first day of spring.
But the mood turned ominous as more and more teens showed up by 8 p.m. Between 9 and 10 p.m. the packed crowds reached a crescendo, according to police officials who deployed highway patrol, narcotics strike force and other units to assist officers on South Street. A parent, who had seen a text message or a post on Facebook, alerted police about the potential flash mob.
By 9 p.m., Yee Chau, manager of eModa, a clothing store, on South near 3rd, said "It was total mayhem. Kids were out of control. They were wall-to-wall. You couldn't see the sidewalks."
One armed owner, who showed the Daily News his gun permit, protected his business by standing outside with five assistants.
At Supper, a restaurant in the 900 block, bartender Kyle Fennie opened the locked door to let two woman customers out, but a mass of teens descended, and he let the women back inside. During a lull, he walked them to their cars.
About 10 p.m., police fanned out at either 2nd or 3rd Street and gradually moved the crowds west on South ot Broad. Kids started running at top speed, with some going around the block, and coming up behind the cops. 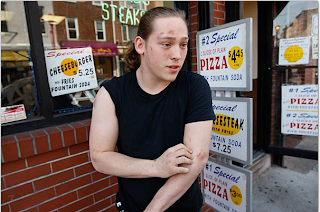 About 10:30 p.m. on South near 6th, Olympia Pizza II employee Seth Kaufman, 20, was in front of the pizza shop, trying to prevent kids from coming inside to fight with young customers who were eating.
As the crowd pushed the door to get inside, Kaufman pushed back. The crowd pushed again, and inside, the owners, 66-year-old Peter Psihogios, his wife, Harula, 58, and son Paul, 30, were pushing back on the store's double glass doors to keep them shut.
Kaufman said that kids slugged him, and he slugged them back, and then he was jumped, with kids kicking and punching him until he fell.
The elder Psihogios tried to bring Kaufman inside, but he was punched in the head.
Kaufman has bruises all over his body from face to legs.

"He saved our establishment from them coming in," said Paul Psihogios. "We owe him a lot of gratitude."

Numerous South Street residents reported hearing what they thought were gunshots about 11:15 p.m. around 13th Street south of South but police could not confirm it.
Barbara Bender, manager of South Street Souvlaki, near 5th Street, had to close at 9:30 p.m.

"It was devastating," she said. "People had been out buying and spending. It was great to see.
"Then kids were running this way and that, until the police had it under control at 11 p.m.

"Really, the mayor should address this with a 10 p.m. curfew for those under 18," she added. "Maybe the city should entertain kids to keep them from causing trouble."
Police said the incident was over by 1 a.m.
No property damage was reported but two juveniles and an adult were arrested in four incidents, police said. They included:
* About 11 p.m. a 27-year-old woman was walking on South near 15th when a large group of male and female juveniles ganged up on her, kicking and punching her until she fell to the ground, where they continued to kick her in the face and head. She was taken to Hahnemann University Hospital, where she was treated for bruises, abrasions and a large laceration on her upper lip. She has since been released. No arrests were made.
* A 17-year-old boy, whose name was not released, was arrested on a gun violation, after getting into a verbal exchange with a police officer, who ordered him to move his car from South Street near 12th. The teen got out of his car, took off his jacket and threw it into the back seat. The officer, who went over to the car, saw a handgun hanging out of the jacket in plain sight; 17-year-olds are prohibited from owning guns.
* A juvenile was arrested for obstructing traffic on South near 4th.
* An adult was arrested for disorderly conduct on South at 5th.
Bam Commentary: This really needs to stop. It's giving the youth who aint apart of this bs a bad name cause a few knuckle heads want to wild out. I wouldn't be surprised this summer if its Cops posted up  everywhere  they expect kids to be at (the gallery,south st,40th st, lancaster ave) just to name a few. Point blank this needs to stop ASAP. To many innocent people are getting attacked and hospitalized over kiddie bullshit.