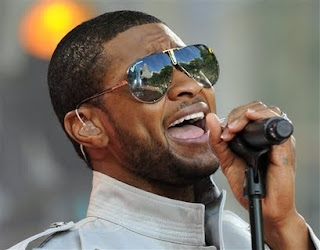 Word on the net is, Usher Raymond, 31, and a male friend were in his GMC Yukon on Dec. 14 when they pulled up to an AT&T store near Lenox Mall and went inside. (sources say that usher was patronizing a working in the AT&T store.) When they returned to the vehicle they found that it had been broken into.

The singer said more than a million dollars worth of jewelry was stolen along with $50,000 in furs and about $20,000 cash. there is also two laptops that  contained a few never-before-heard tunes that he's been working on.

A witness said they saw a Chevy Impala with tinted windows drive up next to the SUV.

The witness told police a man got out of the Impala and popped open the door to the SUV.
The incident is still being investigated.


Bam Commentary: I'm sorry but if this was a real robbery i feel bad Usher. But i mean come on son...who carries all that in a truck and doesnt put the alarm on it? I dont care if i was stepping out my truck to piss i would still put the alarm on if i had all that in my truck. and another thing if this witness saw this y she aint run in the store an tell em he was gettign jacked??? IDK what to say about this except i hope he gets his stuff back. Dueces readers.

By Bam1987tv December 24, 2009
Bam's commentary: She can do no wrong. the girl is vocal beast. Make sure to follow the real her on twitter at @Melaniefiona let her kno bam sent ya j/k unless ya gone do it lol
Post a Comment
Read more