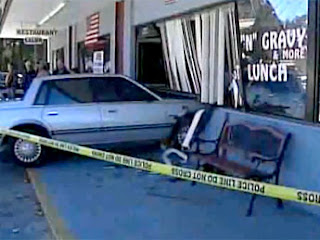 A 92-year-old man who crashed into a Biscuits 'n' Gravy and More restaurant in Port Orange, Fla., and then proceeded to order breakfast Wednesday has been cited for reckless driving.

Police think Charles Pierce hit the gas instead of the brake when parking at the restaurant. Instead of panicking, Pierce got out of his car and placed his order.

Biscuits 'N' Gravy and More employee Ann Jewers said Pierce "sat down and he wanted breakfast" after crashing into the restaurant's front window.

A cook at the restaurant says that a customer had been sitting in the spot hit by Pierce's car, "but he paid his bill just five seconds or ten seconds before it happened. Thank god."

Pierce asked if anyone was injured. One person had a "very minor injury,"

"He come out of his car, no problem. He sat down at the table, has his breakfast, and God bless America, beautiful," the owner, Marino Segalas,.

Building officials said the crash caused no structural damage and the restaurant continues to operate. The damage is estimated at $25,000.