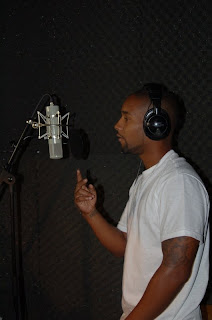 The former B2K member is currently cooling his heels in an L.A. jail after getting busted over the holiday weekend for some serious baby-mama drama.


Officer April Harding of the LAPD's Pacific Division tells E! News that the 24-year-old singer, whose real name is Jarell Damonte Houston, was collared Sunday at his home following a dustup with his fiancée and mother of his three children.

"A patrol unit was dispatched to investigate a domestic violence call," Harding said. "He was subsequently arrested and booked on suspicion of domestic assault, a felony."

The vocalist, who found fame with fellow B2Kers Omarion, Raz-B and Lil' Fizz on tracks like the Diddy-produced "Bump, Bump, Bump" and in 2004's hit dance movie You Got Served, is being held on $66,000 bail. J-Boog also has several warrants that had been issued against him for a series of driving offenses.

I wanted to reach out to my fans right away to clear up the allegations circulating the web. I did not get charged with any form of domestic violence against the mother of my children. I love and respect all of the women in my life and would never harm any of them. Domestic violence is a very serious matter and one that should be treated that way, however this was not a case of domestic abuse. I was taken into custody due to outstanding traffic violations. I took care of the situation, no charges were filed, and I was released Tuesday evening. Thank you to my fans who stood by me regardless of any circulating rumors. I am looking forward to a great year in 2010 for Fizz & Boog and hope that you will continue to support. Thank you.