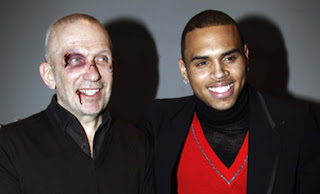 WAIT!!!!!!!!!!!!!!!! Before ya think this is a bash blog let me set it straight that its not. Im sure ya seen this picture buzzing around the net right now wit alot of contoversy around it. In the pic is chris brown and Jean Paul Gaultier (makeup did that to his face not chris) Below im going to post the other pics from Fashion Week and shine some light on the story that somebody trying to dim *clears throat *(Sandra rose). Truth is Gaultier’s fashion show was heavily influenced by boxing.

Sources say, Jean Paul Gaultier take on this present runway show included boxing gloves, bloodied models and a ring instead of a runway. The models who showcased turtlenecks, face masks, and leather also exchanged punches for the photographers, with Gaultier capping off the show. Mr Gaultier later on took photos with guests including Chris Brown not knowing that the pic would burn through the media like wildfire. I think that was a dope concept for a show actually. Now the pants I aint gone front i would rock em to a event or something but not on a regular day lol.. So I end this blog with a "keep steezing on these heathens" (in my cb voice) lol