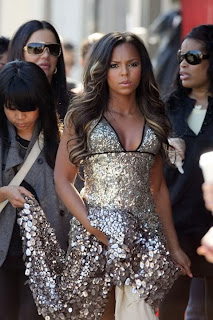 Singer Ashanti has a filed an order of protection against an Indiana man accused of stalking her and her family. According to reports Devar Hurd, 31, is accused of sending Ashanti's mother, Tina Douglas, 32 lewd text messages over the summer. Court papers filed in New York stated that along with the messages Hurd sent photos of his genitals, plus bombarded Douglas and her husband with several phone calls up until his arrest in July. The family has since been issued orders of protection barring Hurd from having any contact with them.


"I had a nice dream about us Shani," he wrote in a message in June. "We was at your place and had a event and [you] was singing. I was feeling so good because we was finally past this and living together." Other messages included Hurd's apparent jealousy over the Grammy winner's relationship with rapper Nelly and inquired about visiting her mother's house. "Hey Tina baby, how u doing sexy," read a message sent on May 29. "Tell Shani I'm coming straight home from work to put in sum overtime. {You] know how I do, LOL."

Hurd's mother Elvira stated that he told her allegations against him were false. She also said he had aspirations to work in the music industry. "If he, in fact, sent the pictures maybe he was just caught up, like a lot of other young people his age, on the Internet," she said in an interview. Elvira went on to say that she wasn't sure if her son actually knows Ashanti and had no idea how he obtained her family's phone numbers.

Ashanti's publicist had little to say about the incident but confirmed that authorities were "handling the matter." Hurd was arrested at his home in Indiana and transported to New York's Rikers Island where he remains. He pleaded not guilty to 28 counts of misdemeanor stalking and aggravated assault. If convicted he faces up to two years in prison.