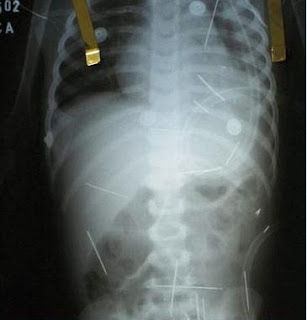 A two-year-old boy was admitted to a Brazilian hospital after 50 sewing needles were apparently pushed into his small body. Doctors at West Hospital in Barreiras believe that the needles were inserted through the toddler's skin in what his mother and police believe to be a strange black magic ritual. The Daily Mail reports that needles were found in the boy's neck, legs, digestive system and abdomen, with one puncturing the child's lung. Doctors say that while they may be able to remove some of the needles just below the skin, hospital director Luiz Cesar said that the boy may have to live with the needles still inside of him because the removal operation could be too risky. Police are still investigating who carried out the attack.