If ya caught the big boy interview you probly heard RiRi say if she had a remote she would put tiffany evans an tila tequila on mute cause they talking ish like they know her.
If ya missed it you can listen to it here #Shots She said she would mute Tiffany evans for saying this #tiffanyevansstatement 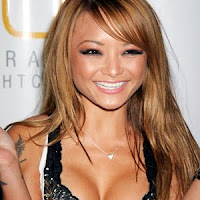 Tiffany evans hasnt responded yet but Tila has already released her response to RiRi's statement.


So I woke up early this morning because I have to get ready to pack to catch an early flight out of town , and I get a google alert with my name with Rihanna! So of course, I was interested on what the hell would Rihanna have to say about ME??? ME?? Really Rihanna????? Ok...but anyway before I actually read what she had to say about me, my first reaction was,


"Awww how cool! Rihanna is talking about me! She must be talking about how more women who have been in Domestic Violence cases should really support one another!"


I only thought she might have said something like that because recently TMZ asked me about Rihanna and I said that I have nothing against her but that it would send out a nice message if she could speak out about her case and give other victims more hope & feel like they are not alone. I said that in a good intention....but ANYWAYYYYY......I was wrong. Rihanna acutally said the total opposite! Sooooo in that case, You guys know me well by now, and you KNOW, that once somebody fucks with me of gets on my shitlist, You will NOT be hearing the end of me! TRUST!


SO after I listed to Rihanna bad mouthing me, my first reaction was "WOW! WHAT A BITCH! AND A TOTAL LIAR! WOWWWW!"

But this is not the reason for me blogging about her. I'm not upset that she would give me some free press talking about me on the radio, so thanks RiRi for shouting me out! =)


No, the reason I am GOING INNNNN on her and about to tell the world her DIRTY LITTLE SECRET(told from sources close to Rihanna's camp), is because she knows there's been a lot of controversy about me being "Allergic to Alcohol" but at this point, who the fuck cares! SO here we go.


RiRi....babygirl....First of all, I have NEVER been to ANY AMA Award show....so why are you lying about that? However, I DO remember seeing you at the MTV MUSIC AWARDS, so maybe that's the one you were talking about, but who knows, you probably don't remember because you're so full of yourself and always drunk so I don't blame u for getting confused.


Second of all, you said that you saw me backstage with a drink in my hand? Wow, Im shocked! Cuz from what I can recall, you were so busy being a DIVA backstage and being SO RUDE TO EVERYONE, with your 10 people entourage and Security guards, having people run back and fourth driving them mad, with all your diva and rude behavior! Acting as though you were the biggest star at the MTV MUSIC AWARDS! And as for me? Yes, of course I am no where near you as far as musical Success, and I give u Props for that. I even liked a few of your songs like "Disturbia" and thought your live performance was pretty sexy, even though you sing REALLY OFF KEY when u sing live, but at least you're not lip-singing! Props for that! So back to what I was saying, U said u saw me backstage with a drink in my hand? First of all, how do u know it wasn't just a coca cola?? Majority of my fans KNOW, that I LOVE grape soda, coca cola, and sunkist sodas. So yes, I had I drink in my hand and it was a coca cola. But WTF does that have to do with you?? U were so busy backstage being such a diva, one of your security guards almost pushed me and my manager over just cuz you were walking by! WOW!!!!!!! RUDE! & who are you to condemn anyone for drinking when ur drunk ass is out everynight wasted. Such as these photos, some of thousands of you drunk....but do u see me ever making remarks about u being wasted before? NOPE! So whatever bitch....


She went in for awhile on that rant wit pics of rihanna drunk and everything. then she drops this bombshell

Dam can we say shots fired lol. what do you think of this readers??

HIDDEN SECRETS REVEALED FROM INSIDE SOURCES: RIHANNA HAS HERPES!!!!!!!!!! OMGGGG!

Wow, I'm sorry girlfriend, but you were cool until u decided to open up your mouth about me so I have no choice. Everyone in the entertainment industry knows, you just do not fuck with Tila Tequila and think you can get away with it! Even Perez Hilton knows that(that's another inside story I have about him & myself, but I will post about that in another blog).


So everyone, yes.....I heard from legit sources, that is the HUGE SECRET our prestine, perfect little Princess RiRi, the "IDOL" has been hiding from the media. A very close source of mine, who works in the same legal camp as Rihanna, has told me that the reason why Rihanna wasn't speaking out about the CHRIS BROWN incident is because there was a catch 22 in it. Rihanna has herpes, and....well......I don't wanna put anyone else on blast, but Rihanna has herpes and gave someone else herpes that she had slept with.