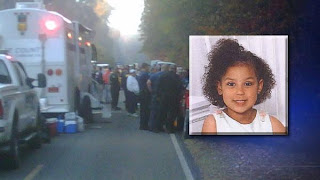 The child's remains were located in an area bordered by Highway 87 south and Walker Road - just south of Sanford - during a second day of searching.
Davis was last seen alive at a Comfort Suites hotel in Sanford last week - the same morning her mother reported her missing from her Fayetteville home. Police say a surveillance video from the hotel showed the child with 29-year-old Mario McNeill.
The area where police found the body is about 7 miles from the hotel.

McNeill turned himself in Thursday night and police say he confessed to taking the 5-year-old. However, McNeill's attorney told reporters his client would plead not guilty.
Police arrested the child's mother, Antoinette Davis, Saturday. She is accused of human trafficking, prostitution and felony child abuse. Warrants say she provided her daughter with intent that the girl be held in sexual servitude.


They seemed to be doing fine,


When I seen them, they seemed to be doing fine. We all was at my mother's house. Antoinette seemed fine. Shaniya seemed fine. They was laughing and playing with the other little brother. He was fine. I mean everybody seemed to be ok.