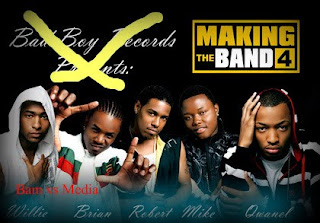 
Day26's run at Bad Boy Records has come to an end.


The group has left the label, according to a report from TheBoomBox.com, but say they are still a part of Diddy's extended family.


Bad Boy is always our family, but we're with Atlantic right now,

Although they became stars on reality television, Day26 are now determined to prove that they have what it takes to make it on pure talent, rather than TV ratings.

We really want to get people focused on the artistry, on the music,


I think a lot of people lost it with the entertainment of the show. So now, we really want to show people what we're all about, that we do our thing whether its on stage, in the studio, writing and producing -- we do it all.


Day26 are currently in the studio working on their third group album.

Diddy had previously locked down a distribution deal with Atlantic Records for Bad Boy, but just months ago, he opted to sign with Interscope Records where he'll be releasing his next album, Last Train to Paris, with his new group Dirty Money comprised of himself, former Danity Kane member Dawn Richard and newcomer Kaleena.