Teen charged as Adult for murdering a 9yr old 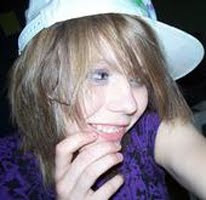 Blessed with a Friday off school, 15-year-old Alyssa Bustamante dug two holes in the ground to be used as a grave, authorities said. For the next week, she attended classes, all the while plotting the right time for a murder, they said.

That time arrived the evening of Oct. 21, when Bustamante strangled 9-year-old neighbor Elizabeth Olten without provocation, cut the girl's throat and stabbed her, prosecutors said. Why?

Ultimately, she stated she wanted to know what it felt like,

Rice, who interviewed Bustamante in the days after Elizabeth's disappearance, said she confessed to investigators and led them to the fourth-grader's well-concealed body in a wooded area near their neighborhood in St. Martins, a small town west of Jefferson City.

A Cole County judge ruled Wednesday that Bustamante, who has been held in Missouri's juvenile justice system, should be tried as an adult. Hours later, the teen was indicted on adult charges of first-degree murder and armed criminal action for allegedly using a knife to kill Elizabeth. A judge later entered a not guilty plea on Bustamante's behalf and referred her to the public defender's office.

The court proceedings marked the first time that the suspect in Elizabeth's death had been publicly identified since a two-day search for the girl by hundreds of volunteers. When they found Elizabeth's body Oct. 23, authorities only said that a 15-year-old had led them to it and was in custody for the slaying.

Bustamante remained largely expressionless as she sat with her hands shackled around her waist in court Wednesday. She occasionally looked down beneath the brown bangs that covered her eyes and swallowed hard as a judge read the charges against her.

On one side of the courtroom sat her mother and grandmother, who has been Bustamante's legal guardian for about half of her life. On the other side sat Elizabeth's mother, relatives and friends, several of whom wore pink — Elizabeth's favorite color.

Bustamante was ordered held without bond pending her trial. If convicted of first-degree murder, she would be sentenced to life in prison without parole.

Witnesses at Bustamante's adult certification hearing described a girl who was bright yet depressed and clever in a sometimes sneaky sort of way. She ranked in roughly the top third of her class at Jefferson City High School, the principal said, and had been in no trouble at school or with the law.

Yet Bustamante had tried to commit suicide at age 13 and had been receiving mental health treatment for depression and cutting herself, said David Cook, the chief juvenile officer in Cole County. Once, she led her family to believe she was attending a local church event when she instead sneaked off to a concert in St. Louis, about two hours away, Cook said. On one or two other occasions, Bustamante spent the night in the woods without permission, he said.

After her arrest, Bustamante tried to cut herself with her own fingernails while being held in juvenile custody, said her appointed juvenile defense attorney Kurt Valentine.

He argued Bustamante should remain in the juvenile system, where she could potentially be rehabilitated before being set free by age 21. Valentine warned that Bustamante would either kill herself or be assaulted and killed by others if she were placed in an adult jail cell or prison.

We are throwing away the child and we are signing a death sentence for Alyssa,


She is not going to survive her time in the Cole County jail.

Cook recommended Bustamante be tied as an adult. Cole County Circuit Judge Jon Beetem agreed, saying the killing was vicious and that the state had no adequate facilities or services to treat Bustamante if she remained in the juvenile system.

Bill Heberle, with the Missouri Division of Youth Services, testified that the state has no secure facilities with fences for female juveniles. Youths in Missouri's juvenile system generally are housed in group settings and are not typically watched by staff 24 hours a day, he said.

Bam Commentary: This is some crazy ish.On my days off from school i was worried bout playstation,football,or what new game came out.(dont judgeme) But never did it cross my mind to go hey why dont I dig a grave today? Something is seriously wrong in this childs head and somebody needs to find out what it is. this is just IMO