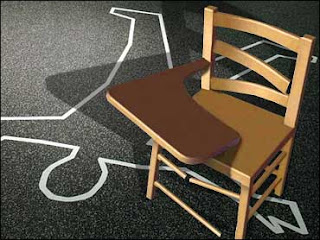 Silvanus Shannon, 19, Eugene Riley, 18, and Eric Carson, 16, all of Chicago, were charged as adults ordered held without bond, the Tribune reports.

Prosecutors declared Albert an "innocent bystander" in the fight that led to his death.

* * * * *
Chicago police are still investigating the gang fight that erupted Thursday in Roseland that resulted in the death of 16-year-old Fenger High School student Derrion Albert.

Albert was killed in a melee near the school that police believe is a continuation of ongoing tensions between Fenger students that are members of rival gangs.

An amateur video of the brawl shows dozens of people punching, kicking and swinging wooden boards in the street. Albert was struck by blows from one of those boards, Fox Chicago reports, and the video obtained by Fox shows a person getting hit with a board and then stomped on after falling to the ground.

As people rush to help the injured person, a voice can be heard on the video yelling, "Derrion, get up!"


Albert's mom said witnesses told her that her son "trying to help another student and kind of got mixed in with the crowd of the fight and he was hit."

A memorial and march planned for Sunday was rescheduled for Monday at 1 p.m., the Tribune reports.

The student who hit Albert with a board is in custody, Fox reports, as police try to figure out why Albert, an honor student whom family and friends said was not involved with a gang, was killed.

Meanwhile, police beefed up security around Fenger Monday as students returned to school the week after the melee that led to Albert's death.

"We want to provide reassurance to the public that there's a police presence and they can feel safe in the neighborhood and kids can feel safe at school," the Tribune quoted Morgan Park District Commander Michael Kuemmeth as saying.