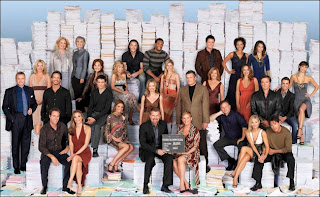 Friday marked the final flicker of CBS' "Guiding Light," as that venerable daytime drama logged its farewell hour after 72 years on the air.

The last episode took an upbeat, life-affirming tone, complete with a scene that gathered many of the characters at a picnic in the park on a beautiful day.

And the closing moments sealed the future of the show's signature on-and-off-again supercouple: Reva (Kim Zimmer, who created the role in 1983) and Josh (Robert Newman, who started on the show in 1981).

They rendezvoused, according to plan, at the local lighthouse and declared their undying love. Then these soul mates climbed into Josh's pickup truck.

And they drove away, as the words "The End" flashed on the screen before a final fade-out.

"Guiding Light" began on radio in 1937, then moved to TV in 1952. In recent decades it was set in the midwestern town of Springfield, where it focused on the Spaulding, Lewis and Cooper clans.

CBS issued word that it would be axed last April, and production of the show, which was taped in Manhattan and in nearby Peapack, N.J., wrapped in August.

"Guiding Light" now becomes the latest victim of the ratings collapse afflicting the entire soap-opera world. With an average 2.1 million viewers, it was the least-watched of all the network soaps, which after today (and some 15,700 past weekdays for "Light") will total only seven.

On Oct. 5, CBS will fill the slot "Guiding Light" is vacating with a new edition of the game show "Let's Make a Deal."

Now i never watched this but from what i hear from my co workers it sounds like it mos def is better then this lets make a deal...But i guess CBS is ready to pull the plug..There is def gone be some unhappy people that flick on cbs on they lunch break an realize they fav show is gone lol