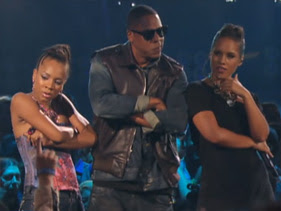 For those of you who didnt see Lil Mama come onstage toward the end of the song idk wat vm u was watching lol.. She even struck a pose with Hov and Alicia Keys, after Jay had gestured for her to chill out seconds earlier and joked she was "T-Paining." This afternoon after she i guess thought about it she sent MTV News a statement via her manager explaining the incident.

I did not mean any disrespect towards Jay-Z or Alicia Keys," the statement reads. "I admire them and look up to them as role models. 'Empire State of Mind' had my emotions running high. In that moment I came up onstage to celebrate my two icons singing about NY.

Lil Mama's rep said she may have more to say about the situation later.

SO now can yall leave the girl alone? they was repping her city an she got ahead of herself...everybody gets into when they city get repped..Aint saying she right for jumping on stage but now we know why she did it and its the same reason i said on twitter this morning lol.. The topic "lilmamais" blew up and was even the top Twitter trend for a few hours i now hope that trend stops but 9 out of 10 it probly wont smh..What you as the reader think of the situation?? post it below