Jamie foxx gets disrespected by club owner in ATL 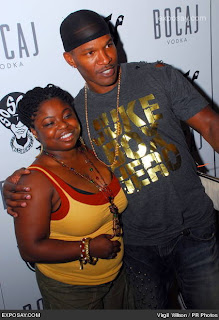 Jamie Foxx decided to leave The Velvet Room in Atlanta Sunday night after how he was disrespected. Jamie was supposed to host a party there, but the owner was out of line and completely disrespected Jamie’s family. Here is what a informant had to say about the event:

Jamie Foxx was supposed to host the Velvet Room nightclub owned by Alex Gidewon AG Entertainment last night for his after party concert in Atlanta, GA. When Jamie arrived at the club with his guests which included his mother, sister, band members, and management. The owner Alex let Jamie and the first half of his guest inside which included his mother while his sister, security and others waited to gain entry . Jamie was escorted to his section but had to wait until it was cleaned and cleared out before he could get settled. After a few minutes of waiting, someone told Jamie that his sister which has down’s syndrome and was celebrating her birthday with her brother and other family members were not allowed in the club. Jamie immediately went to the door to get the rest of his guests and the club owner was just going ballistic on the crowd and Mr. Foxx’s guests. He was humiliated at the treatment that his sister and his guest received by not an employee but by the club owner himself. He sent his security to get his mother and promptly left the club disgusted at the treatment he and his guests received.

If it couldnt get any worse the informant also says Jamie’s sister was harassed because she has down syndrome and the owner and his cronies didn’t know she was Jamie’s sister.
I dont know about yall but I def would of did more then just leave because you dont disrespect a mans family like that..But daps to Jamie for keeping it calm and just leaving without causing a scene.