Dummy of the week 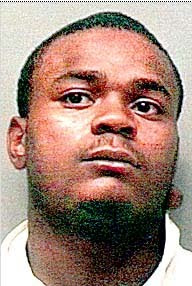 St. Louis resident Billy J. Robinson was allegedly peeling back the steering column of a car he didn't own last Wednesday afternoon, when the woman who owned the vehicle knocked on the window. She informed Robinson, 20, that the police were on their way, and suggested he get out of her car and follow her, which he agreed to, until he "had a change of heart" and escaped over a fence.

The police had a fairly good idea who they were looking for, as the description of the suspect mentioned he had a "large abnormal growth" hanging from his left earlobe.

Later that evening, a man with a walnut-sized excrescence on his left ear showed up to the police station carrying two bags. He told the authorities that he needed money for a bus ticket to Bloomington. Cops saw fit to question him, and not just because no one in his right mind would want to go to Bloomington.

The man with the weird ear was Robinson, say cops.

The bags allegedly contained waterlogged clothes matching those described by the witness, along with gloves, two screwdrivers, a set needle-nose pliers and a pen light. Robinson was also carrying four printed pages featuring detailed instructions on "how to hotwire a car," with one of them labeled "try this at night," (obviously he didnt read that part), police say.

Robinson was charged with attempted vehicle theft, criminal damage to property and criminal trespass to vehicle.

"I've seen some bizarre and dumb actions on the part of suspects, but this ranks up there as one of the finest examples of a dumb suspect I've encountered...The dispatchers and the officers had quite a few good laughs over the scenario." - East Peoria (IL) Police Chief Ed Papis

All i can say is he had to be out his mind to walk in a building full of police wit all the evidence on em like that..SMGDH i would of loved to be in there for that one cause i would of been lmfao in that station along wit the cops...