Artist to look out for: Jasmyne Hinson 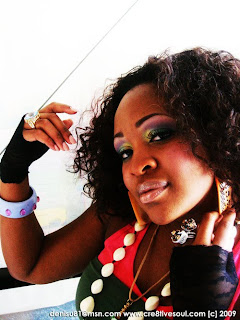 The “entertainer bug” bit Jasmyne at the age of 2 when she sang her first solo in church. A couple years later, she was enrolled in performing arts school where the seed of her stage presence was planted. At the age of 15 the cultivation of her studio experience began at PARC studios with her first manager Dexter Redding, the son of the late Otis Redding. Throughout her high school years Jasmyne began to work with a diverse group of producers, engineers and writers. Honing in on her niche as an artist, most of her free time was spent in the studio. While adapting to their styles of working she added to her work ethic and accuracy in the studio. Upon graduating from high school she spent her undergraduate years as a Theater major learning and exploring the worlds of jazz and musical theatre. She then began singing professionally with a myriad of artists, bands and musicians. It was quite clear that Jasmyne Hinson is much more than a session singer or just a staple in the choir stand. Her ardor of music in general was ignited and her focus changed. Jasmyne made the commitment to create timeless music. Professionally, she has worked with such names as Leon Timbo, Kim Burrell, Damita Haddon and performed with opening acts for Tweet and Tyrese. Jasmyne is a featured soloist on the BonaFide Praisers CD entitled “Born to Worship and Lawrence Flowers and Intercession debut CD entitled“Major in Ministry, Minor in Music”.

It is her desire to reintroduce "GOOD QUALITY" music into the world. Her music can be classified as inspirational music but not the cliché Gospel music that only speaks to ministers but also to those in and outside of the church. One of her missions is to inspire other artist to create “real” and “good” music again. She is now in the midst of preparing for her album to drop and planning for a release party as well. More info will be coming soon so keep your eyes open for updates on this upcoming star.