Another Suspect Under Investigation In Lindsay Lohan Burglary Incident 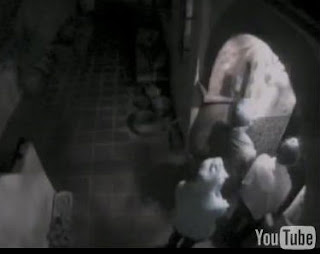 Following the arrest of Nicholas Prugo, believed to be one of three people captured on surveillance video at Lindsay's Hollywood Hills home, another member of the party may have been uncovered.


The second party is reportedly Rachel Lee - a woman who appears pictured with Burgo on the suspect's Facebook page and bears a strong resemblance to a woman captured on the tapes.

LAPD sources could not confirm a second suspect when reached by Access on Friday.


As previously reported by AccessHollywood.com, Prugo, 18, was arrested on Thursday on felony charges of burglary at Lindsay Lohan's home as well as that of "The Hills" star Audrina Patridge earlier this year.

Patridge's Hollywood home was allegedly burglarized on February 22 -- the same night of the 2008 Oscars. She posted surveillance footage of the alleged suspects breaking in on her blog several days later.

Authorities told Access on Friday that Prugo has had a few run-ins with the law this year. He has been arrested three times in 2009 - in February, August and on Thursday.


The LA District Attorney's office confirmed to Access on Friday that Prugo was arrested on February 7, 2009, for possession of cocaine, for which he pleaded guilty. He entered an 18-month drug diversion program, which the DA's office stated he violated prior to his arrest on Thursday. He has a pending court date on November 7 to deal with the charge.

What relationship Prugo has with Lindsay, if any, has yet to be revealed, but the star did tell Access in a recent interview that she believed the burglary had been done by people she knew.

"Unfortunately I think it's people that I know ... who used to be friends but I don't know if -- we'll see. I could be completely wrong," Lindsay previously told Access.