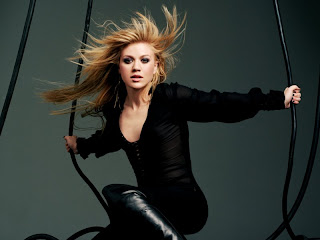 Kelly Clarkson has finally set the record straight on her new single "Already Gone", and Beyonce's smash hit "Halo", she puts the blame all on Ryan Tedder for the reason the songs are identical.

Here is some sections from the article

“Ryan and I met each other at the record label, before he was working with anyone else,” Clarkson begins, gritting her teeth. “He’s from Oklahoma, I’m from Texas; we got along really well and had some of the same influences. We wrote about six songs together, four or five of them actually made the album. It was all fine and dandy. I’d never heard of a song called Halo. Her album came out when my album was already being printed. No-one is gonna be sittin’ at home, thinking ‘Man, Ryan Tedder gave Beyonce and Kelly the same track to write to.No, they’re just gonna be saying I ripped someone off. I called Ryan and said, ‘I don’t understand. Why would you do that?’”

The frustrated Clarkson claims she “fought and fought” to try and prevent her label from releasing Already Gone as her third single, out of respect for Beyonce . But if you listen to the radio you can see the label got their way.

“In the end, they’re releasing it without my consent,” she sighs. “It sucks, but it’s one of those things I have no control over. I already made my album. At this point, the record company can do whatever they want with it. It’s kind of a shitty situation, but.… You know, you learn.”

This isn't the first time that this situation has been brought up, after a recent article claimed that Beyonce heard Kelly's song and then "demanded" a track like Clarkson's to be included on her "I Am... Sasha Fierce" album.


I'm glad that Kelly put Ryan and her record label on blast. I glad she stepped up because a lot of producers are doing this to a lot of artist. One in particular is polow the don, he got 3 artist’s wit a jacked track..if yall don’t know which one look up kelis blindfold me, chilli straight jacking, and Nicole whatever you like and you will see what I mean. I mean seriously you cant possibly think that wouldn’t be noticed smh at ya polow.

Another thing is im sure B knew about this also, but im confused why she didn’t step forward and say anything about this? I mean im pretty sure she had to hear the song or even the drama about her being in another swagga jacking drama lol. But then again when your pop is Matthew all about a $$ Knowles I bet you wouldn’t say anything either. ***I already feel the rocks from the B stans now for this one lmao***