Nobody is staying together anymore..aint that right Usher 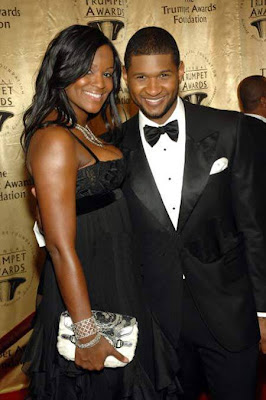 Usher filed for divorce Friday from his wife of nearly two years, Tameka Foster-Raymond, according to The Associated Press. The petition, filed at Superior Court in Atlanta, did not give a reason for the split.

The marriage between Usher, 30, and Foster, 38, reportedly has been strained for months now. Sources have said the pair haven't lived under the same roof for quite some time, as Usher has relocated to Nevada to work on his next solo album. Pictures and video of Usher, alongside Jermaine Dupri and others, partying in Las Vegas have appeared online in recent weeks.

A rep for Usher had no comment when contacted by MTV News.

Early this year, Foster suffered cardiac arrest before undergoing plastic surgery in Brazil. Upon learning of her condition, Usher canceled his performance at Clive Davis' annual pre-Grammy gala and flew to the foreign country be to with her. Davis told the crowd at the party that Usher had to leave town due to a "serious injury in the family." People's sources called the event a "brief reunion in an otherwise troubled marriage." The couple have two sons together, Usher Raymond V, born in November of 2007, and Naviyd Ely Raymond, born last December. Foster has three sons from a previous relationship.

The couple's relationship has been fraught with controversy ever since Usher broke the news — somewhat off-handedly — to MTV News in March of 2007 that he and Foster were engaged. The couple married later that year in Atlanta in a simple ceremony, after canceling the original, more lavish wedding.

Rumors were rampant about the reason for the cancellation of the original wedding plans, including that Usher's mother disapproved of the relationship, claims the couple later denied.

Throughout their marriage, the couple was dogged by insinuations that the singer was being controlled by Foster, and further reports of discord with his mother, whom he released from her duties as his manager in 2007 before rehiring her the following year. Questions about the singer's fidelity also arose. Usher took umbrage with much of the discussion and fired back at the gossip in interviews.

In a "TRL" appearance in May of 2008, Usher unleashed a verbal broadside about the rumors. "I love my wife very, very much," he said. "There was a little rumor earlier this week about us separating. It ain't true. We in love. Get outta there," he said, raising his left hand and showing off his wedding band. "Matter of fact, I'm tired of people continuing to talk so much trash about me, know what I'm saying? And my relationship.

"My wife is not 40 years old. I love her to death and I'm a black, strong man in America standing up for my people — as a man to my wife, to my son, to my family," he continued, removing his sunglasses and talking directly into the camera. "I'm making a stand that a lot of us should make. I coulda been like any other man who has a child and live with that woman and continue to just play the game. ... I'm trying to do it the right way. This is the way you're supposed to do it! Pay attention, fellas."

Usher then turned his back to the camera while the studio audience applauded. "TRL" host Damien Fahey then attempted to continue with the segment, only to be interrupted as the singer began part two of his verbal assault.

"And my wife had nothing to do with me firing my mother — nothing like that, that's trash," he said. "I hear y'all talking crazy out there, she's a beautiful black woman. Stop. Stop talking. And I love her. Stop it."