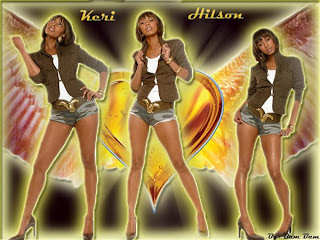 Drama has been running very high for The Pussycat Dolls this year, with horrible sales, injuries, so so performances, in-fighting, and dare i say accusations of favoritism towards Nicole Scherzinger (like nobody reall saw this coming)
Well now during the promotional rounds for her solo album "In A Perfect World...", singer-songwriter Keri Hilson has let slip that Nicole's return to PCD after her solo album was placed on the shelf may not have been all of what the girls would like you to believe.

Keri: "I wrote Alienated, one of the songs on my album, for Nicole's solo project. It was a good album but she decided to go back to the Dolls instead of releasing it, well she was kinda forced to I think.
"It was a good situation for me as I fell in love with that song, so I got to keep it."

Keri's claims are quite different to what Nicole has to say. Nicole has previously stated that it was her choice to return to PCD so she could get her solo album perfect for a future release. Sounds a lil fishy but IDK because maybe nicole is right mybe keri is..Or possibly that contract wasnt up an robin came to remind nicole of it lol..Either way what do you think of this???