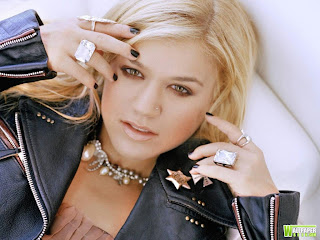 This is another reason why i like Ms. Clarkson lol. Kelly Clarkson bust out in laughter multiple times during an interview that was held today about her thoughts on the situation, Below is the interview an KC's reaction..lmfao guess she isnt a Perez fan..

"I gotta be honest with you, he's gonna get a lot of flowers - And I'm not talking about Perez, I mean the manager!" Laughed Kelly

"I don't think violence is the answer but what did you expect? You can't say that much crap about people without being able to take something".

The American Idol winner then came to the defence of Fergie who was at the centre of the turmoil after Perez insulted her multiple times on his website and constantly referred to her as "fugly".

"It's so funny because how beautiful did she look? Oh my God I would give my left arm to look that beautiful" she gushed.

"No one deserves to be punched in the face, but, it's expected, I'm surprised it hasn't happened already!".

Then in a fit of laughter Kelly blurted out "I'm thinking "how much did will.i.am pay his manager to do that?" coz you know he or Fergie wanted to! [laughs]"

The host (who was also laughing) then informed Kelly that Perez had gone on air that morning crying and balling his eyes out over the situation, which caused Kelly to burst into another fit of laughter.

"Meanwhile," said Kelly "I hear that he's mean to celebrities kids, like, you're hurtful to children, nobody's gonna pity you! I'm not about violence but this was bound to happen."