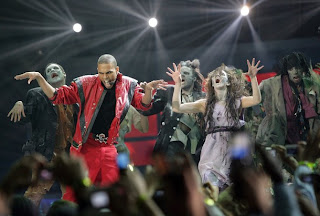 If you was looking for CB to come out an tear it down in his MJ tribute i now know i wasnt the only one anymore :) The debacle that's spreading through the grapevine is that Jay-Z pulled a Matthew "hater" Knowles..For thos who dont kno what that is it means Hov threatened to pull his performance if Chris Brown was to perform similar to what happen to letoya.But shhhhhhhh ya aint hear that from me lol

To my knowledge Chris Brown was in fact set to perform "Man In The Mirror" but when Jay-Z heard about it he wasn't happy and said he'd pull his own performance of "D.O.A." if Breezy took the stage. this info came from a source who was at the rehearsals.. We all know CB would of tore man in the mirror down on the BET awards 4real..Beyonce was also going to perform a tribute to Jackson by doing "Smooth Criminal", but at the last minute she changed her mind and did "Ave Maria" instead and i know i aint the only one who thinks we would of rather seen smooth criminal then that fairy outfit.. An in regards to the Bet awards the only tributes actually to MJ that i liked was from neyo "bald head dont care" an ciara..yall can say wat ya want bout cici but she put her heart in that performance an thats y i loved it.